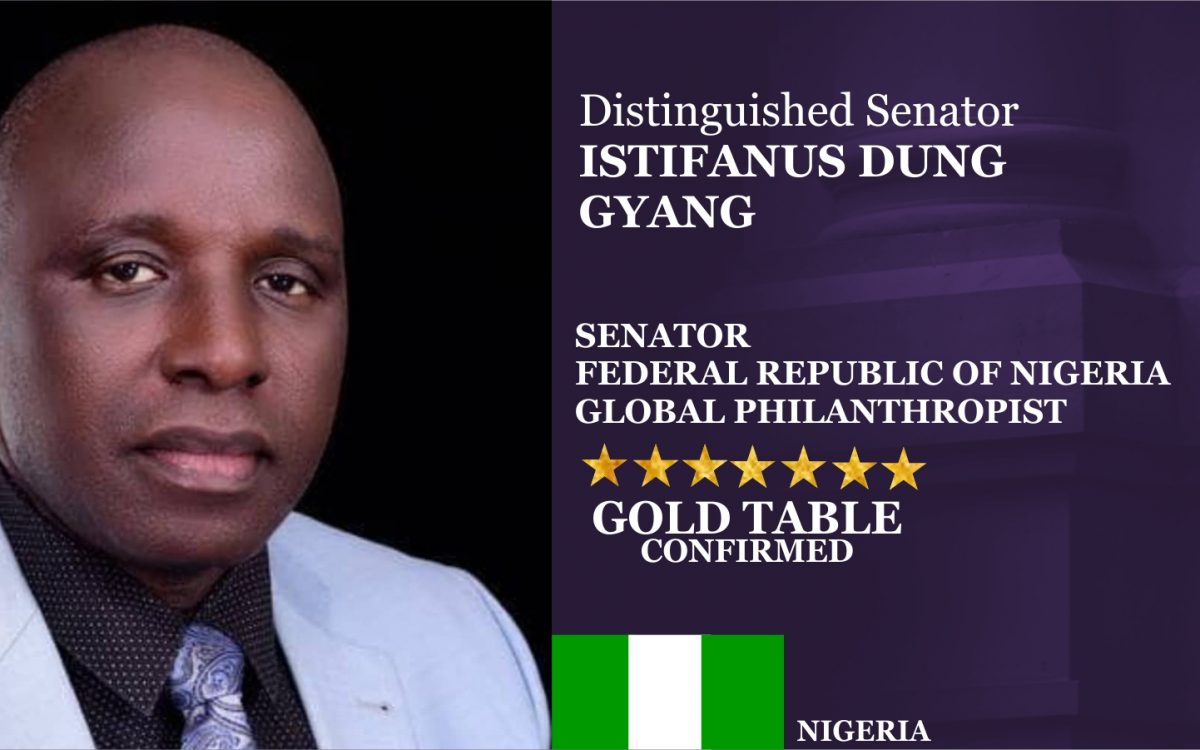 Opening a citation of ID Gyang without the appendage of the well deserved and rightly earned prefix of Senator is neither an error or omission but a perfect signification of the kindly, humane and humble demeanour of this great man. This is a man whose presence alone would normally exude that ambience of calmness and serenity.

D. Gyang has, and still mean a lot of things to many persons with whom he has had one kind of relationship or the other, especially the community, which has been privileged to call him son.

On the whole however, the man, I. D. Gyang, would best be described as an enigma, owing to his rise and transformation from quite a humble start in life to his present attainment.

An attribution to a lifestyle of hardwork, diligence, dedication, a determined and dogged spirit of pursuit and purposefulness. He naturally bestrides any atmosphere of his habitation like a colossus, with peaceful carriage and calm disposition.

Senator I. D. Gyang, whom the good people of Plateau North have found worthy, capable and well fitting to be their voice in the upper chamber, National Assembly of the Federal Republic of Nigeria, was born on 4th February1963 in Fan District of B/Ladi LGA, Plateau State had his early formative years Rawuru, Fan. He began his quest for education at EKAN Primary school Rite Fan and Government Secondary school Riyom for his secondary school where he was the overall best graduating student in 1981.

As it is rightly said, a man’s story of greatness would so easily be found in the very story of his early formation. This is true also of Senator I. D. Gyang, as right from this point in his young life, he started exhibiting leadership qualities among his peers. He later proceeded to the great Ahmadu Bello University, Zaria and bagged a BSc International Studies in 1986. He later bagged an LL.B Degree from the University of Jos in 2005 and was at the Law School in 2007 for his BL and call to the Bar.

Senator I. D. Gyang is beside the aforementioned, also a thorough breed administrator and leader, who has in cumulation, rendered selfless and impactful service to his people, community and the nation at large for the period spanning 24 years and counting. He began his career pursuit as a classroom teacher in 1999 and would later proceed to serve as an administrative officer and Permanent Secretary in the Plateau State public service from 1990 to 2014.

He voluntarily retired into active politics following the demand that was placed on him by the people to represent Barkin Ladi/Riyom Federal Constituency in the House of Representatives where he served creditably with visble and impactful deliverables of democracy dividend as a member of the 8th Assembly. Of course, as it is often said; the reward for a job well done is simply more work, hence the good people of Plateau North deemed it suiting to demand that Senator I. D. Gyang move a stride higher, to offer them an astute and altruistic representation in the red chamber of the National Assembly as Senator.

Here on this platform is the man that has connected with the hearts and minds of his people. One that is simple yet thorough, calm yet outspoken. A man whose impact, capacity and

versatility has attracted many honorific awards, too numerous to be listed here, a few of which include:

I.D. Gyang has been appropriately decorated and garlanded with over 30 honours and awards by State, National and International bodies including but not limited to the following;

TIV Youth Peace Initiative award as “Warrior of Peace” for contributing towards peace in Plateau State.

National Parent Teacher Association of Nigeria (NAPTAN), Award of Excellence and Symbol of true representative of the people.

ECOWAS Youth Parliament Award of Excellence and Support for the Youth and students.

Legislative Writers Forum Award of Most Outstanding House Member of the Year.

Senator I. D. Gyang is an active and vibrant Legislator whose voice is heard and respected. He has voiced out the concerns and pains of his constituents and citizens across the nation. The most recent is his strong identification with the cause of Persons with disabilities of the him he has this to say; “I remain an advocate of disability rights and care. What Persons with Disabilities need is not just empathy but accessibility to the the political, social, economic, and cultural rights and possibilities that are available to all of us because they are not less human in any way”

He has equally advocated for the rights of women. At the recent empowerment he held for women in his constituency, he had this to say, “BEING A WOMAN IS NOT BEING LESS HUMAN neither are women less human because of their feminity.”

He boldly asserted that “FEMINITY IS NOT INFERIORITY.”

Senator I. D. Gyang is an astute administrator, proficient technocrat, patriotic philanthropist, accomplished and industrious humanist and indeed an outstanding Legislator who is impacting his constituency and the nation with credible, versatile representation in the National Assembly. The people of Plateau North Senatorial District took note of the performance of I. D. Gyang hence elected and elevated him into the Senate on the platform of the PDP as Distinguished Senator of the Federal Republic of Nigeria where he has risen to the challenge of being a voice for the people with a clear three point vision of Securing the people, Reconciling the people and Empowering the people.

1). Securing the people is on the platform and instrumentality of PEACE as against resort to violence which has done more than enough havoc on the people. Senator Gyang has remain a strong advocate of peace in his Constituency through the instrumentality of constructive engagement and dialogue despite the setbacks.

2). Reconciling the people is on the twin pillars of forgiveness and restitution. Forgiveness is acknowledging wrong done and saying sorry. While Restitution is the act of making up for wrong done by retoring the affected parties to status quo ante. Restoring the property and assets that were taken or confiscated as a result of the conflict.

3). Empowering the people is through good representation, programs and projects.

The IMPACT driven Vision and Agenda of Senayor I. D. Gyang has found expression in Projects and Programs in Plateau North is such manner that it has RAISED THE BAR in terms of delivery of democracy dividend and credible representation.

—Being a forceful and audible  VOICE  for Plateau North and Nigeria.

— Attracting attention and presence of government through

ZONAL INTERVENTION PROJECTS and the Nudget process some of which are depicted hereunder:

1). I No 3 Classroom Block and Furniture at Sanback, Riyom LG

4). Water and Sanitation Solar Drivem at Pengana in Bassa LG.

The idea of the tournament was embedded in Senator Gyang’s manifesto and peace vision for Plateau North as aptly captured by the branding of the tournament, Peace, Unity and Reconciliation Football Tournament.

The tournament was unprecedented as it had all the 73 electoral wards in the Senatorial District participating at the preliminary stage.

All the teams were kitted in Jerseys by the Senator.

The group stage of the tournament saw 24 teams playing in a league where the group of eight emerged from to play the quarterfinals. The semi finals saw four teams from which the finalist being Rafan Ward of B/Ladi and Jenta Ward of Jos North LGAs emerged.

The tournament attracted national and international attention as a Europe based football scout came to seek openings for the grassroots stars discovered during the tournament.

The participation of players and spectators made the tournament a household name while it lasted.